Structure.Gantt 2.4 includes additional Gantt attributes that can be used in Structure, gadget filtering and other improvements

In this release, we have expanded the number of Gantt attributes available to use in Structure columns, formulas and effectors.

Some of the new attributes include:

It is now possible to filter Structure.Gantt gadget content the same way a Structure gadget is filtered, using a JQL, S-JQL or Text query: 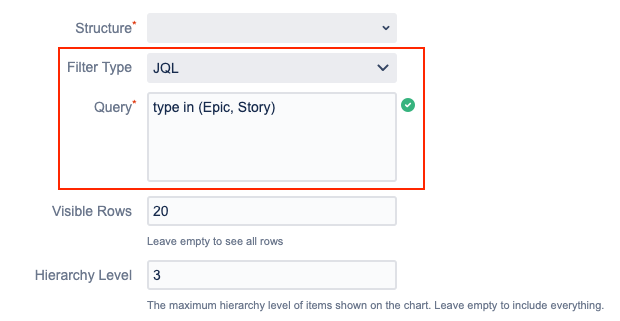 Structure.Gantt 2.4 requires Structure 6.0 or above.

If you already have production data from a previous version of Structure.Gantt, please back up your database or Jira before upgrading.

In terms of stability and performance, this release does not bring significant changes compared to version 2.3.0. There are no particular special areas of interest for load testing and stress testing Structure.Gantt 2.4. We advise running the same testing procedures as you've done for previous upgrades.