The synchronizer is normally installed, resynced and used in the Incremental mode, tracking changes to issues and structure and updating issues. The synchronizer supports Exporting from Structure, changing statuses of the issues in the structure on one-time basis.

The synchronizer tracks updates to issues and to structure, and tries to make sure that the status of the parent issue corresponds to the aggregate status of its direct children.

When you configure Status Rollup, the most important parameter is the selected Statuses and their order:

The order of the selected statuses should correspond to earliest-to-latest order of phases of the workflow. For example, the screenshot above shows configuration where Open is followed by Resolved, which is followed by Closed. With that configuration, once all sub-issues of an issue are Resolved, the synchronizer will try to make the issue Resolved too. Once all sub-issues are Closed, the issue will be made Closed. But if at least one sub-issue happens to be Open, the issue status will be set to Open — because it is the earliest status in the specified order.

On the screenshot above:

How Status is Changed 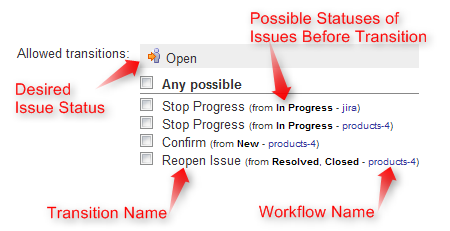 So what the synchronizer does is:

Why Can a Workflow Transition Fail

It's not guaranteed that the synchronizer will be able to change the Status, because workflows are too flexible and there are many reasons that a given transition, which you have allowed in the configuration, can fail to execute. Here are some of the possible causes:

As described above, it's possible that there are several possible transitions from one status to another. The synchronizer will try all of them unless one of them succeeds.

You can set up a specific Resolution value to be set whenever a transition involves changing the resolution. If you don't specify this parameter, the default resolution or already existing resolution will be used.

Manually Changing Status of an Issue That Has Sub-Issues