You are viewing documentation for Structure Server and Data Center version 5.3 and patch releases. For other versions, see Version Index or Structure Cloud.

Group generators allow you to group issues by most standard Jira fields, custom fields provided by Jira and other issue attributes.

Depending on the field you are using, the Group generator may simply organize the issues currently in your structure, or it may add new issues to your structure:

Placement matters. Generators only affect issues beneath them, so if you want to group the entire structure, place the generator at the very top (by selecting the structure's name in the top row). If you place it anywhere else, it will only group the items beneath it.

Generators are applied to the current level, in the order they appear in the structure.

In the example below, we used an Insert generator to add issues, and then added Group by Sprint and Group by Assignee generators. Two new levels were created, grouping our issues first by Sprints and then by Assignees:

To rearrange the hierarchy so that Assignees are at the top level, followed by Sprints, simply reorder the generators. In this case, drag-and-drop Group by Sprint under Group by Assignee.

Most of the options under the "Group By..." Automation are applied the moment they are selected, and you will not be asked to set parameters for the group. However, you can still customize a Group generator by locating it within your structure and double-clicking its summary.

From the options dialogue, you can select a new issue field to group your structure by, change the level within your hierarchy where the sort is applied and more. 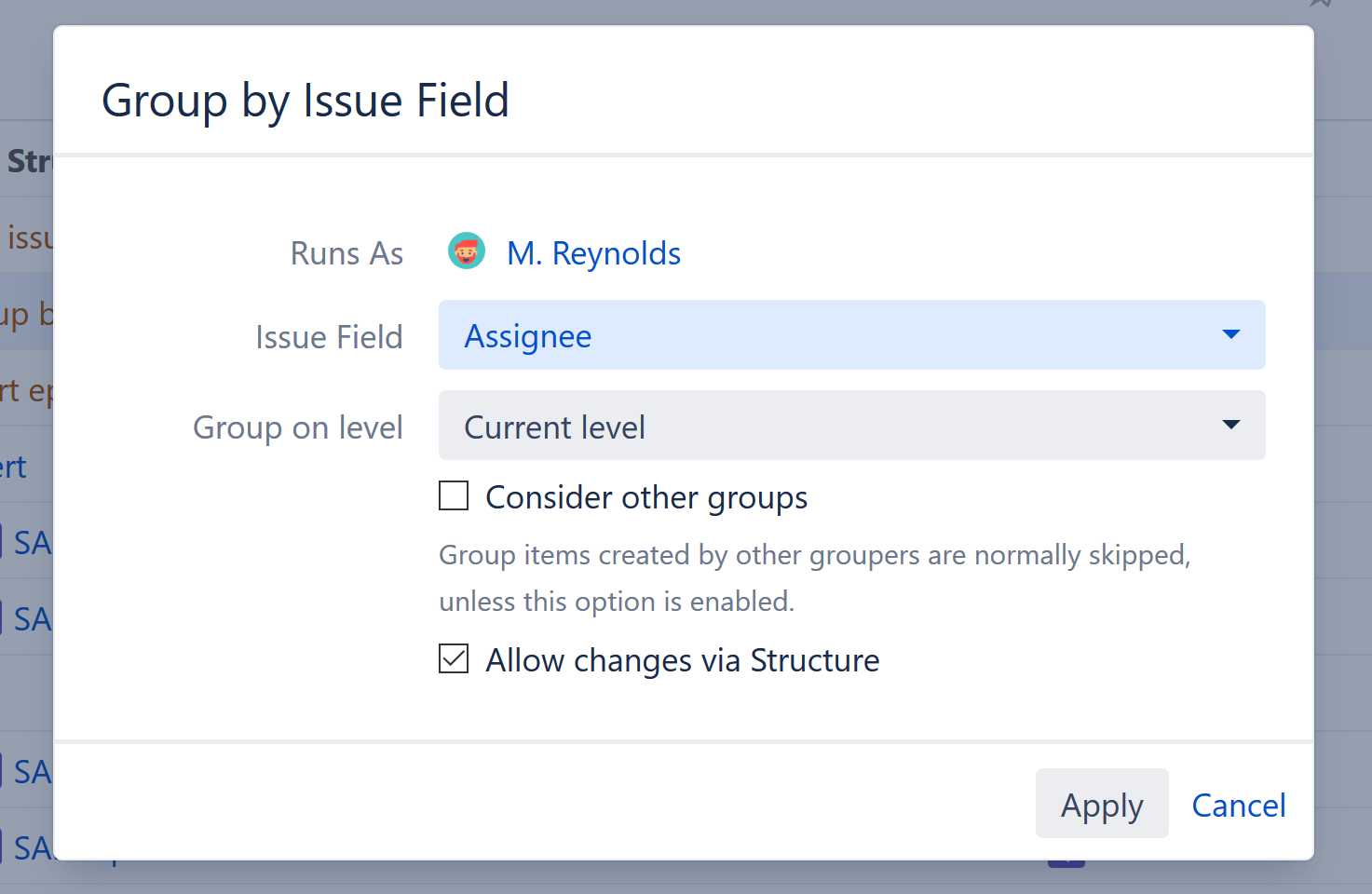 Updating a field may not always be possible. In particular, it is impossible to change text attributes or the results of a formula by moving issues within a structure. If a move results in an invalid change, you will receive an error message and the moved issue will return to its original location.

Let's look at the scenario above, where we grouped our structure by both Assignee and Sprint. Here's a breakdown of how that works:

There may be times when you want to include the results of a Group generator. For example, the Group by Issue Link generator adds a new level of issues to your structure. If you want to group the resulting issues by another attribute, select the Consider other groups option.

You can group a structure by any of the following attributes:

It is not possible to group by date or numbers.

Grouping by a Multiple-Selection Field

Issues can be grouped by attributes that allow multiple selections, such as Labels. This could result in issues appearing more than once in your structure.

Additionally, if the Allow changes via Structure option is enabled, the following will happen when you move an issue between these groups:

If any of the issues being grouped do not have a value in the group-by field, a "No x" folder will be created, where "x" is the name of the field. Moving an item to this folder will remove all values from the field.